Whatever happened to James Christopher Hill and his art?!

Yes, It's me, James Christopher Hill.  I honestly wish I had a cooler, easy to remember name than one of the most overused names in the Western Hemisphere. It used to be almost amusing whenever I went to a crowded location like a mall.  Sometimes, a woman would scream out "Chris! COME HERE NOW!" - I would always turn and see if she might have been trying to get my attention but it would be a stranger scolding her child that walked away from her. But I digress.

For the past 3.5 years, life has been really, really hard on me. The details are personal, but let's just say that I struggle each day to make it through.  I'm not ashamed to admit that I've been suffering major depression and anxiety for 5 years. I almost came out of it in 2019 and then the bottom dropped out on September 6th, 2019.  Since then, I've been worse off. Then Covid hit, Made it through that nightmare so far, but I still take precautions. Then comes right after Covid, the invasion of Ukraine thanks to "Puken", Gas prices skyrocket because oil companies can charge whatever they want.  I honestly don't know how the rich owners of oil companies, especially the King and Prince of Saudi Arabia being worth 1.4 Trillion dollars (yep, that's right) and call themselves good Muslims. Meanwhile about 2 billion people in the world don't have access to clean water, food, health and shelter homelessness in America has skyrocketed which is horrible along with all of the other horrible atrocities that are happening between gun violence, mistreatment of people seeking political asylum and racism is out of control. What makes this horrible even more is that it's the year 2023 - I thought we had evolved as a population, but I guess not. Then we have the media basically giving everyone that sells something that people need a reason to raise prices due to media starting the rumor which became true overnight - "Inflation" which much of it is caused by rising gas prices while the oil companies are making record profits while sitting on enough oil to practically give away. Of course, the "Federal Reserve" raising rates right after Covid after lowing rates to near zero for many years causing home prices to skyrocket and if you can't get a home, you have to rent at insane prices which is almost criminal. Basically, there are many nightmares happening on a continuous basis.

I guess, in a way, as I seem to have a sixth sense, I sensed darkness coming for the world for many years.Let's just say it hard for me to smile during times like this as I'm empathic and hate to see so many suffer. I guess that's why I started right after September 11th, 2001 to create bright, vivid art with a highly saturated color palette.  Many of my now friends that started out as customers fell in love with my art because of the way it made them feel. I had a mission suddenly, to create highly saturated in color art to an almost surreal, abstract depiction of our world.  Everything I created was vivid and bright.  If it was a city that I painted, the cities where Utopian in nature as I LOVE architecture, especially Art Deco, Futurist to Cutting Edge, Zero Carbon footprint cities that create their own power naturally with no fossil fuels as well as generate clean water by filtering out toxic water and cleaning our oceans using natural plants and it can be done easily enough.  Self sustaining cities became another "mission" of mine so I could introduce a hopeful vision of the future.  We just got to get past these times and embrace harmonious sharing and loving of ourselves and helping others. 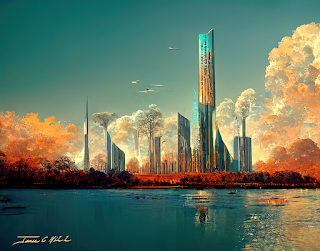 Medrearail City in the Afternoon - Copyright 2021 - James Christopher Hill - James Hill Gallery
So, it's January of 2023, isn't it time we grow up, love each other and really focus on cleaning this world from toxins, pollution and carbon and methane emissions which are massively raising the Earth's temperature way above the normal global warming via nature and pole shifting.  I still believe in the future, but greed must be obliterated and love in its place. Sounds like a pipe dream but we could be that easily enough.  There has to be a way.  People are terrified of A.I. but that might be the answer in disguise. We start though, by working on ourselves which is something I've been personally working very hard at since 2019.  Some progress has been made over time for which I'm proud of. I do have a large new body of artwork to unleash. I have also spent the last three years unlearning bad sketching habits and learning from the masters good sketching habits especially with the human figure. Many are on my website under Figure NSFW.

So, I've been here, I'm still working on art, but just honing my skills. Finally, I had to finish a major commissioned peace (one that took years off of my life and more than that). Long story there and tune in later for more details and to see the painting.
I love you all and miss you, but life has been hard for me mentally as it's been for many out there.  If you see someone struggling with Depression and Anxiety, be there for them, hold them, love them, and do NOT tell them to snap out of it.  You don't know until you've been there.  You can't imagine the strength it takes to persevere! I hope none of you reading this ever have to feel the way I do. At least I'm still able to create and I'm grateful for the blessing.
With love, James (aka "Chris") Hill.
Posted by James Christopher Hill at Sunday, January 22, 2023 No comments: 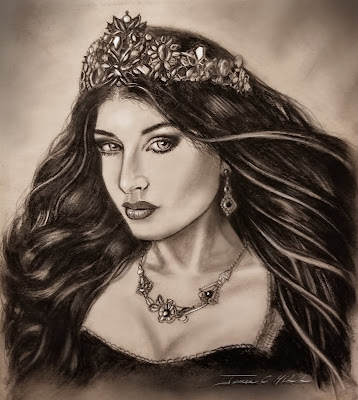 This is my latest attempt at finally learning to sketch in full charcoal vein and pencils.  This is a portrait of the incredibly beautiful, alluring, brilliant and very talented and creative Artist Esmeralda - https://linktr.ee/modellaesmeralda
She is a Model, Photographer, Very Skilled Seamstress and just very creative and talented person - a Genius. She lives in Germany and if you want to see more of her, give her a Follow on Instagram at https://www.instagram.com/modellaesmeralda/

Here is the Original Photograph I created my sketch from.... :) 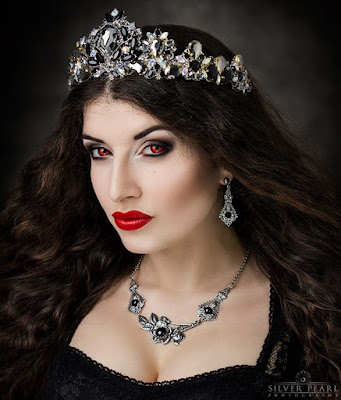 
Posted by James Christopher Hill at Thursday, June 20, 2019 No comments:

Posted by James Christopher Hill at Thursday, March 22, 2018 No comments:

Posted by James Christopher Hill at Thursday, March 22, 2018 No comments:

Posted by James Christopher Hill at Monday, March 05, 2018 No comments:

Do NOT Lean Your Painting Back on Your Easel

Posted by James Christopher Hill at Monday, March 05, 2018 No comments:

James Christopher Hill
I am a visual artists that creates Fine Art Oil Paintings of Skyscapes, Landscapes, Portraits, that are focus on capturing life in it's truest form. In addition, I create illustrations based in the Science Fiction/Horror/Fantasy/Steampunk Genre. These images are designed to invoke in the viewer a feeling of serenity and wonder as each piece is a journey capturing the essence and feeling of the moment that is portrayed. I work mainly in oils and digital 3D and 2D and my paintings are in collectors around the world. I am continuously creating various images in different genres that explore the creative realms and realities.